When they announced the football schedule the 2013 season my brother and I started discussing how we could make it to College Station for the Texas A&M game. We booked flights in January and FINALLY the weekend arrived. 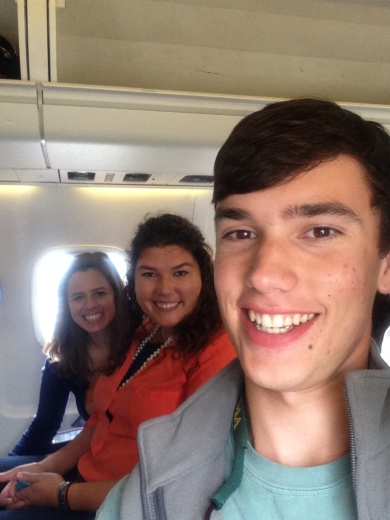 We arrived in Texas and our first stop, being the conservative, American, Bush loving tourist we are stopped by the George Bush Presidential Library. 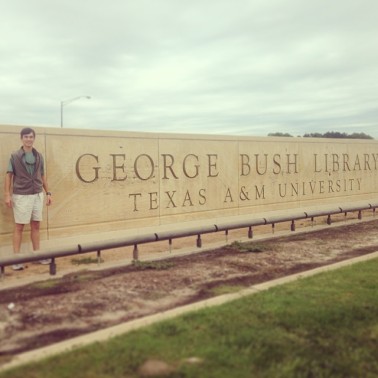 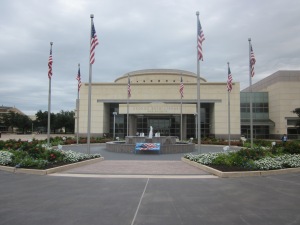 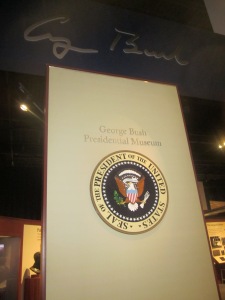 I had heard to much about the Aggie Yell Practice they have each Friday night prior to home games. That was one item on our list of things to do we were not going to miss, we had been up a long time, but we made it to midnight. 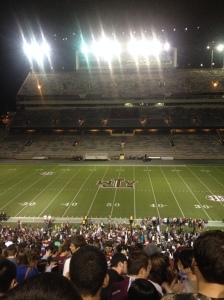 It was interesting, not many people could explain what was going on, but it was still something to see. They do not have cheerleaders at A&M, but have yell leaders who are male. They give signals to inform the crowd of the cheers. It was interesting to see and experience. 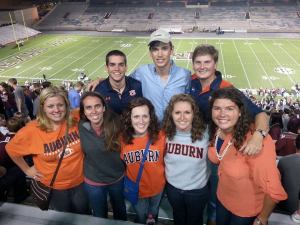 Emily and I got up pretty early on Saturday morning to get prepared for the game and we left the house dressed up and ready for the 2:30 game. Driving through College Station on a game day was not bad, we just couldn’t figure out where the fans were. It was 11:00 and there was not that many people out, parking lots were not too full, a stark contrast from Auburn game days. 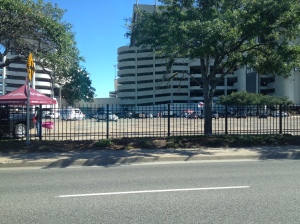 It is 11am and there are not that many people, where is everyone?

Parking at A&M was frustrating, you could only park in a lot, their campus is huge, one of the largest land-wise in the nation, but you were not allowed to park on any grass, you had to pay to park in a lot. A&M’s tailgating reminded me more of what you would see at a NFL game, in parking lots, actually on tailgates of vehicles. We attended a College of Agriculture and Life Sciences tailgate, a great networking opportunity, and was able to meet up with a friend of mine, Anna, who is at A&M finishing up her master’s degree. 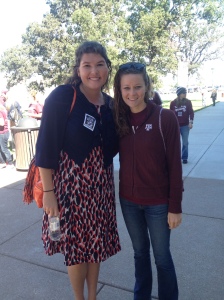 We made our way to the stadium, the majority of the ~6,000 Auburn fans in attendance were in the upper end zone. Their stadium in in three separate sections the student section takes up one whole side and holds around 30,000 people! Very impressive, this is where their “12th Man” sits. Their students didn’t get there extremely early, but they were packed in around kickoff. To be 30,000 strong I didn’t think their student section was that loud, they got that way towards the end, I’m going to give them the benefit of the doubt and sayit was the wind or where we were sitting, but I’m not convinced. 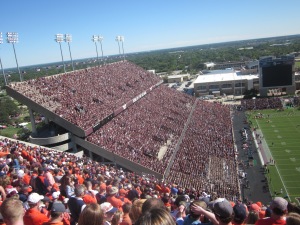 In case you missed the game report, Auburn was able to hang in there with the Aggies and Ol Johnny Football. Auburn scored a touchdown with about a minute and 19 seconds remaining which was plenty of time for A&M to score again. The next 1:19 was the longest of my life.

It came down to a few seconds and a final down and as Johnny was tackled in the backfield, cheers of victory filled the air in the Auburn section. I am pretty sure I picked Emily up and swung her around. We screamed and hopped and hollered. It was great. 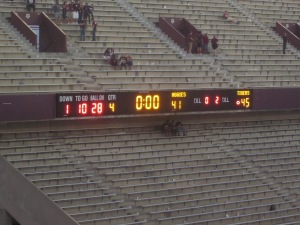 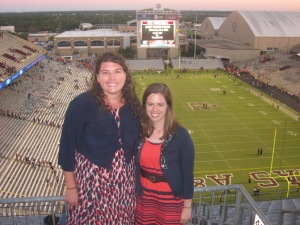 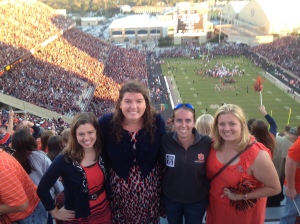 I will never forget this game and I am so glad I will be able to remember it with Emily, Kira and Krista.

We stayed and cheered some more, sang the Auburn Alma Matter and then headed for the car. The entire time I was at Texas A&M we never had anyone give us  a hard time, be rude to us, bark in our faces, scream at us etc. It was such an enjoyable experience, the best away game experience I have had thus far. 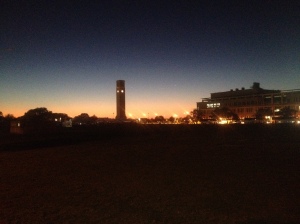 Few Last Highlights of the Weekend:

1) We got a great deal on a rental car for obvious reasons. We dubbed it the washing machine it had the motor of one and was about the size of one. Good thing we didn’t actually have to drive it to Texas. 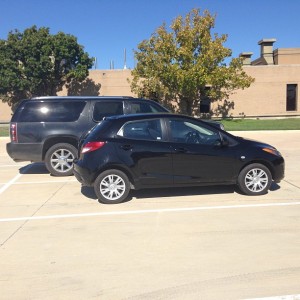 2) BBQ- Texas Brisket….enough said. Everything else was good whether it was sausage or turkey. Tex-Mex was also great. My mouth is watering just thinking about it. 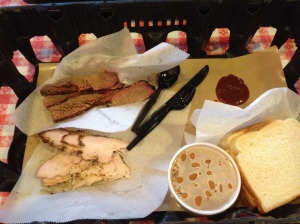 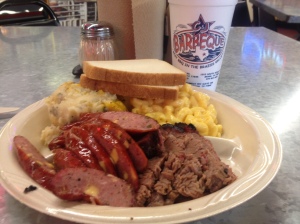 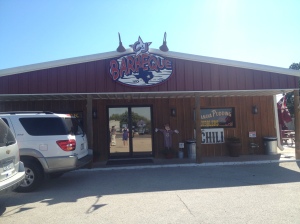 3) We got to meet some great people, worship with the congregation out there which reminded me a lot of Auburn. A special shout out to Amy, Chandler, Emily and Taylor who let Emily and I stay with them.

Texas A&M has probably been one of my top 2 away games I have attended. It had all the elements of a great weekend. I have two more trips to games this fall so Arkansas and Tenneessee are going to have a lot to live up to. The experience was great, but coming home with a win over Texas A&M…. priceless. 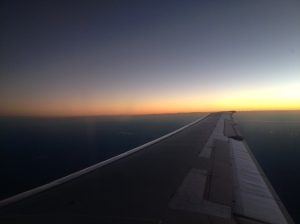