Recently at one of our college student Sunday night devotionals one of the seniors, John Mark Henderson, related the book “The Giving Tree” to selflessness and did a fine job by providing such a profound example of seflessness. 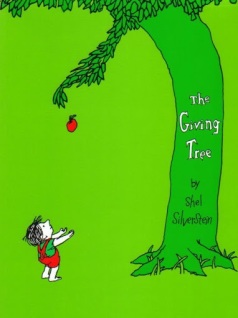 This week as I reflected back on his lesson it reminded me in ways of the Toomer’s Oaks and their end. I was expecting the last week to be a sad one, after all our beloved Toomer’s Oak Trees were going to be cut down. They were poisoned during our 2010 football season by a bitter fan from a rival school, who took things way too far. Sadly, these trees are not something easily replaced. They were a beautiful landmark in downtown Auburn and the space that is now in their spot looks strange. 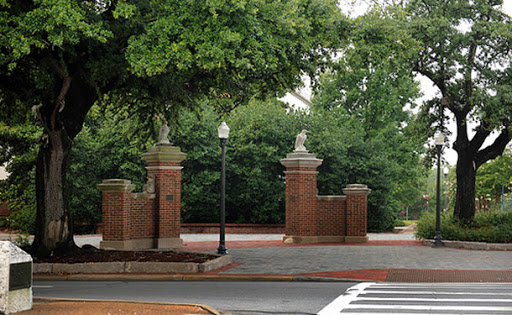 In the case of the tree featured in “The Giving Tree”, she gave all she had for the boy until she reached a point where she had to tell him she had nothing left to give, but she did. Even when it seemed like she had gave all she had, there was more. Same is the case with the Toomer’s Oaks. 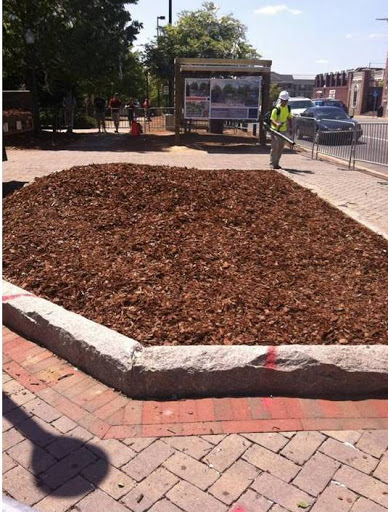 The corner right now looks bare, but yet those oaks have gave Auburn fans SO much and there is still so much for them to give. Until I came to college here I had never rolled the oaks. Since my freshman year I have made so many wonderful memories at the corner of Magnolia Avenue and College Street. Many rolls of toliet paper thrown, runs underneath the canopy of the trees, several talks with friends and late night strolls. 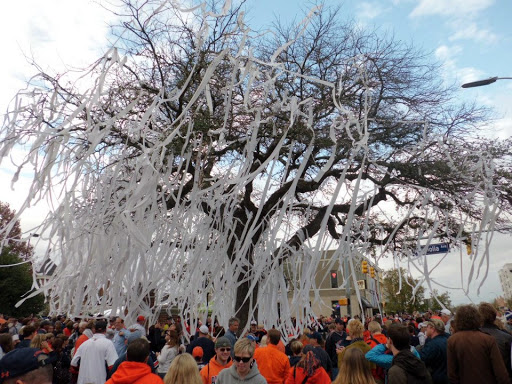 During my freshman year the night we wont the SEC Championship on December 4, 2010 was a very memorable night
. 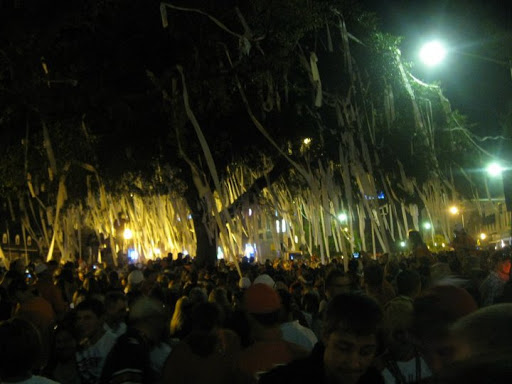 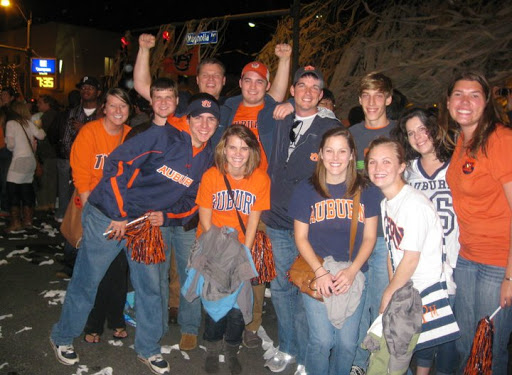 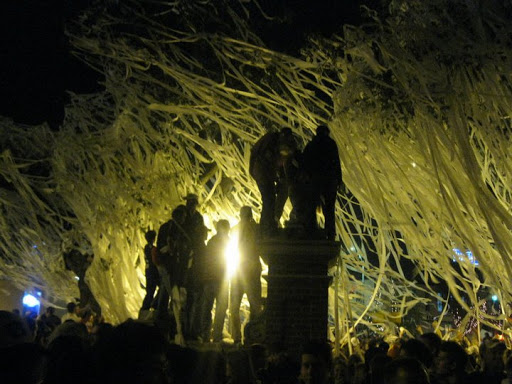 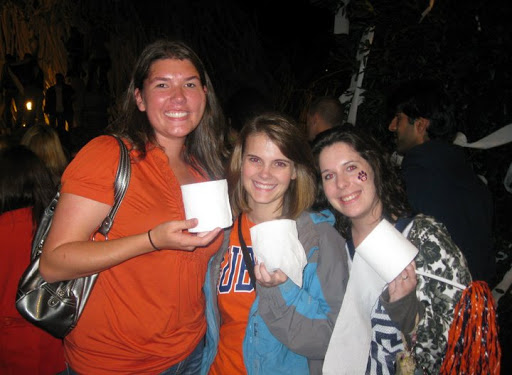 The National Championship rolling was another night I will never forget! 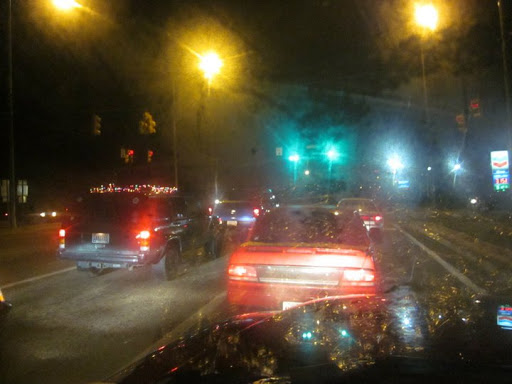 Traffic jam on College Street heading to the game. Megan McMurray and I parked in the first spot we came to in the Comer Hall parking lot and sprinted all the way to the corner. 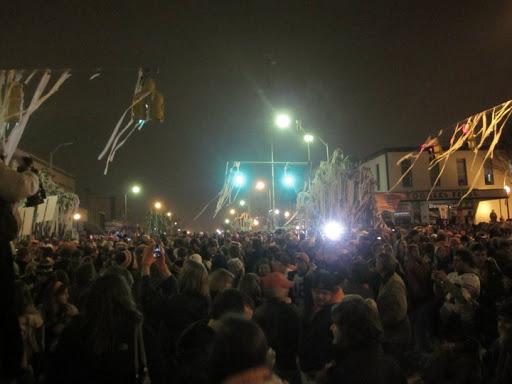 The rest of the Auburn Family joined us 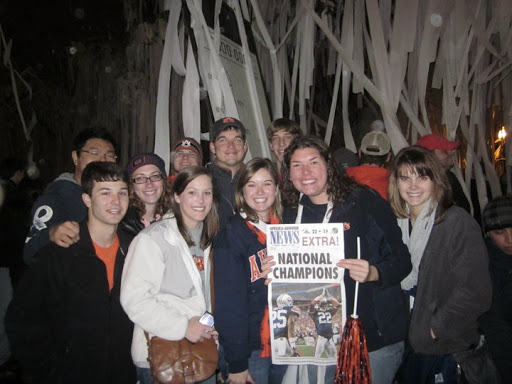 National Champs! What an exciting night. 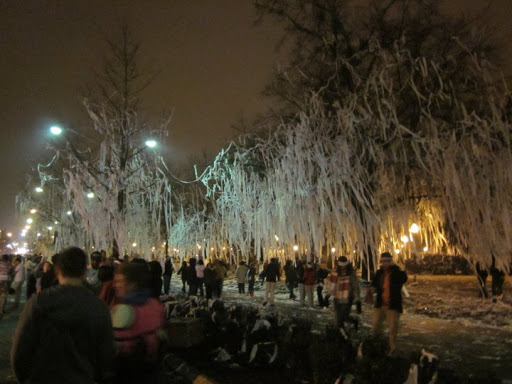 Brady and I after his first freshman game at the corner. 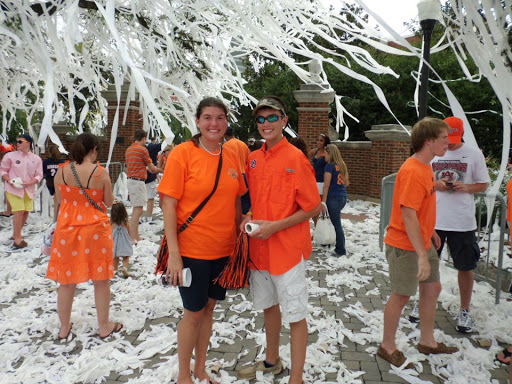 We did not get to roll the trees as much this year as I would have liked to, but Saturday after the A-Day game, which 84,000+ people attended we rolled until I’m sure there was not a roll of toliet paper left in Auburn’s stores. 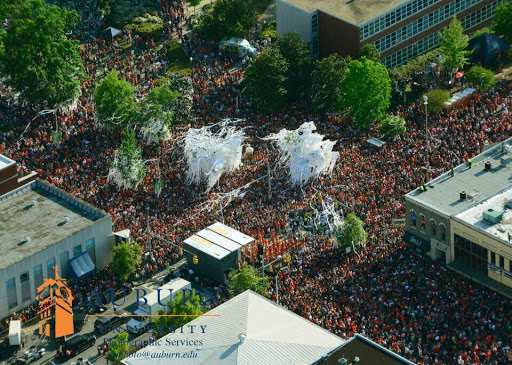 These shots taken from above the crowd just help to solidify what this tradition means to the Auburn Family. People came from all over just to be a part of the final rolling of the oaks. 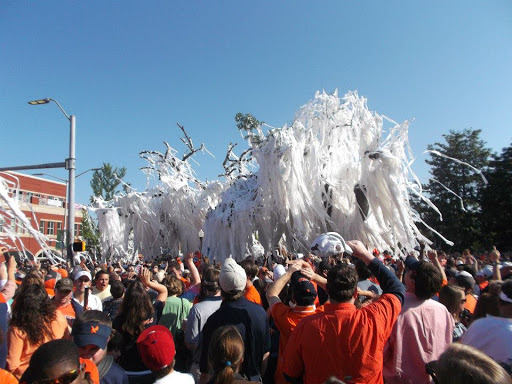 Come fall when we (hopefully) win more football games. People will still gather at Toomer’s Corner as they have for year. This is where the trees are still giving back, the tradition started back in the 60’s and I’m sure willl continue. Toomer’s Corner is more than the trees, it is a place where Auburn fans can gather, usually we gather to celebrate victories of sports, politics (you name it), and some choose to gather there to protest.

This spot on Auburn’s campus has provided so  much for Auburn fans in the past and I cannot wait to see what it offers in the future. Shel Silverstein’s tree in “The Giving Tree” and the Auburn Oaks must be closely related they have provided so many memories over the years and still have so much still to give.